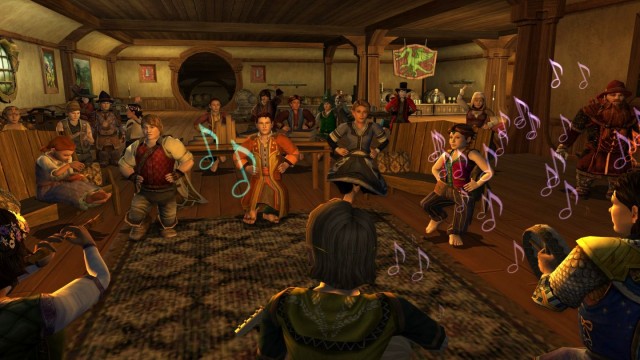 Babble is a plugin originally designed to reduce the amount of emotes you receive during larger events. Later it has been developed to be able to filter words in other chat channels as well. The plugin was written by Simbo.

The plugin “filters” the chat channels you chose and sends only “allowed” messages to your chat window. In other words, the plugin excludes the chat messages you would rather not see. It comes with a predefined list of the “usual suspect” emotes from busy social events (dance, clap, cheer, etc.), which will be auto-removed and not shown in your chat window when Babble is enabled.

You can easily add to this list, or even remove those emotes you want to see. You can also set up lists of terms or messages to be filtered from other channels, not just the emote channel. Additionally, you can filter messages from different players, so you can still see all messages directed towards yourself or those delivered by your good friends.

How does it work?
Babble is notified whenever a message is received. If the message is not set to be “blocked”, the plugin sends the message to the “Standard” chat channel. This means that you need to do the following for the plugin to work:

It is worth noting that the plugin cannot actually stop messages being received. You would still need to turn off the relevant channel from displaying in your chat window. The plugin is simply re-sending new, filtered, messages to your standard channel.

For “Blocked” lists, the following applies:

For “Allowed” lists, the opposite applies

Note that you can enter “Me” as a valid name, so you capture see both the messages you write yourself and those directed towards you.

Why you want to use Babble at busy events

Unzip the zip file and move the “Simbo” folder to your “Documents/The Lord of the Rings Online/Plugins” folder.

Babble can be loaded via the in-game Plugin Manager, or with one of the following command line option

The following commands are available:

These options are also available via the Plugin Manager, under the “Options” tab for the Babble plugin.

Simbo would love feedback on the plugin, both of what works and what does not. Please leave yer comments below.

For comments on previous versions, please look at:
The first blog post announcing the plugin
The beta page, where test versions of the plugins are released

The plugin is also available on LotroInterface