Here’s the 2020 Yule video from the Laurelin hobbits!

Merry Yule everyone, and best wishes for the Yuletide! I hope yer all have some relaxing days with friends and family, filled with as much good cheer as possible. To help yer get in the right mood, here is the new Yule video from the hobbits on Laurelin. Enjoy! And if this isn’t enough, be sure to check out the hobbity Yule calendar! Or attend one of the many hobbit yule events!

Since 2012, I have made Yule videos where the hobbit players on Laurelin are invited to take part. Many players attend the video shoots, send in screenshots and offer up ideas. Many thanks to all who helped out! There were too many of yer to list in the credits (and I was also afraid I might miss one or two…). Yer help, assistance and good cheer was absolutely vital for the making of this video, though! I really hope I didn’t forget to add the pictures yer sent in…

So without further ado: The 2020 Laurelin hobbit Yule video (full-screen and high-definition recommended)! More on the making-of it below.

Ever so often, I tell others that I play online video games. I really should have learned not to by now. Because pretty much every time I do, I can almost see the mental eye-rolls, the unspoken “oh grow up already”-thoughts, the sneering sense of superiority just waiting to burst out. Even more so when I tell them I spend a fair bit of time on this, that it is a hobby of mine, that I take it seriously and put a bit of effort into it.

The inevitable comment afterwards is usually: “Why? It’s just a game.”

I suppose it is. When stripped down to the bare necessities, I play “electronic games that involves interaction with a user interface or input device… to generate visual feedback… shown on a video display device”. The games have graphics and sound, there are game rules to follow, mechanics to master and goals to meet.

There’s just one thing missing from the above. The other players.

Ah, that leads to more eye-rolling, of course. For many, online gaming is pretty much the pits. An endless chase for digital glory, overcoming pixel challenges, with no tangible rewards beyond being able to brag about it afterwards. A toxic wasteland of bullying, mean-spiritedness and pretty much every -phobia you can find in the dictionary. These views get stronger the less others have played games themselves.

How can I convey to them how wrong this is?

Of course, there are lots of examples of the above. But there are also so many examples of the opposite. Online gaming can be the ultimate social enabler for the lonely, the awkward, the old and the disabled. Shy persons in real-life can organize in-game events, involving dozens of other players. Gaming can stimulate creativity where you’d think none existed, leading players to draw, paint or write stories, song lyrics and poetry based on their game experiences. Myself, I create videos, although I didn’t know how to when I first started. And so on.

Eventually, you get to learn the players behind the in-game avatars. In LOTRO, I know several players who have passed away. That hurt bad, every time. I also know couples who met in-game, then met in real-life, married and had children. That brought absolute joy. You sometimes sense it when others has a particularly bad time in real-life. A word of comfort from a fellow player can mean the world then. Having someone willing to spend their time with you when real-life is nothing but sadness is pure gold.

It’s not just a game, really. It’s that too, but so much more besides. Treating it like it isn’t doesn’t help anyone. 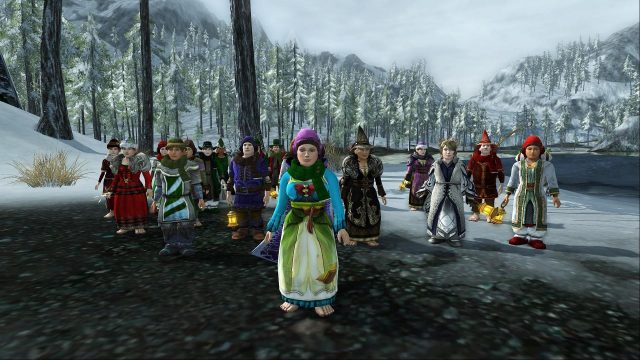 So many grand players!

So what does the above have to do with the hobbity Yule video?

It has been a rollercoaster, also for the LOTRO players closest to me. When the Yuletide approached and Covid infection rates spiked again, it was easy to see how the unease spread. Among those who have hardly left their homes the last nine months. Those worrying about society opening up too fast. Those who got coughs and fevers themselves and worried until the test results came bacl. Those who found out they would not be able to spend the upcoming holiday with their loved ones, due to travel restrictions and quarantines. Those who lost someone near and dear to the illness.

Myself, I have gotten off easy. My job is secure, my family lives nearby, my friends are healthy and the response to the pandemic in my country is about as good as it gets. Still, when November approached, my own motivation for all things gaming had gone to rock bottom. It didn’t help that things were crazy busy at work. Most important, though? The endless slog towards the dark winter, full of pandemic measures and limitations and uncertainty, had more or less nuked my in-game creativity. It just wasn’t fun anymore.

Now what on earth to do with the Yule video?

I winged it. I set a couple of dates for meet-ups, then hoped that inspiration would strike somehow. Eventually it did.

Mostly by spending time with other players, catching on to whatever they said, then trying to tune it into something workable for the video. That helped a lot. Couldn’t have done it without them, really. And slowly, but surely, I got into the Yule mood again. Spending time with others players was the trick.

So there are two segments as usual. Both quite light-hearted and silly, perhaps to escape the current real-world shenanigans.

The first segment is a slow take, mostly hobbits walking in the cold northern lands looking for an oliphaunt, the ultimate Yule wish for a little hobbit lass. Shooting this segment was quite straightforward. It was mostly a matter of finding some recurring scenes (the lass being scared by the oliphaunts), before the payoff near the end. The biggest challenge was to catch a walking oliphaunt on video, especially getting the “between-tusks” shot. I’m happy with the result, beyond catching my own footprints a couple of times. I think the piece of music works really well here too.

The second segment is very much inspired by the “Home Alone” movies, although the video has near 20 children alone home, not just one. It also has a fair bit of Danny Elfman and Tim Burton thrown in for good measure. This segment was probably a bit too ambitious to do unscripted with 24 hobbits in the span of two hours, but I’m quite pleased with how it all turned out. There are some grand crowd scenes, the rascals gleefully embraced their home defense, I could play around with fast cuts and odd camera angles when editing, and I really love how the last charge shot turned out. I hope the results are worth it for those taking part too, there was some waiting between scenes after all. And my eternal thanks to the two burglars who were subject to much abuse during this shoot! grins

The end credits follows up on the “Home alone” scenes, with added Yule screenshots sent in by ca. 25 hobbits. Warm thanks to each and every one of you who did, as well as to those who took part during the video shoots and who helped kickstart my creativity when the Yuletide approached. I hope yer enjoy the end results too!

Want to see the previous hobbit Yule videos? Here’s a playlist of them all!