Me ma says hobbits should stay away from such newfangled things as screenshots… as if!

More fun, exciting and/or quirky-looking pictures by that hobbit adventurer! I have gathered a few more of me own favourite screenshots from LOTRO. If you like these images, here is Part 1, Part 2 , Part 3, Part 4, Part 5 and Part 6 in the same series. Click on the pictures for larger versions. Oh, and let me know if yer like them pictures in the comments below!

I am quite the fan of Monty Python, and one of me favourite sketches is The Argument sketch. So it is no wonder that the Pythons sometimes make their way into the captions of the screenshots I post to twitter.

Given that adventuring in LOTRO invariably leads to combat with various nasty fellers, these two pictures could use the same caption: “Is this the right room for an argument?” Many hobbit roleplayers on Laurelin meet at the Green Dragon every Friday, to relax and have an ale and gossip a bit after the long week. Naturally, being proper hobbits, they like things to keep to their natural order. Naturally, any deviations from the normal are frowned upon.

Imagine the worried looks and hushed mutterings that ensued when we found the cursed chairs that stack on each other, when you try to sit on them. Here, Pycella demonstrates what strange and furrin things that sometimes make their way into the Shire… Speaking of the Green Dragon and strange things happening, we sometimes get people running inside to finish a quest. They are often in a hurry, not even dismounting before they enter the door. This sometimes leads to a glitch where the player stays on his or her horse far into the inn.

You can see the record below. The player here made it all the way into the inn, over the bar and past Barmy (the innkeeper) before he eventually dismounted. Yer can imagine us hobbits talking about that all night! Of course, sometimes the glitch is of a different nature: The player is dismounted, but the horse stays. So you find yourself standing inside your beast of burden for a few seconds before it finds out there are no carrots near and vanishes. 10 years at the Dragon

Speaking a bit more of the Green Dragon, we are celebrating the 11th anniversary of Green Dragon Friday this spring, which pretty much makes this the oldest recurring player event in LOTRO. Here is a picture from last year’s celebrations, the 10th anniversary. Lots of fireworks were set off and grand times were had. Bringing the viewpoints of a hobbit into the large world outside of the Shire can be grand fun. My hobbit is often not too impressed with the dealings of menfolk, ellufs and dwarves, and it certainly shows in the picture below. The view over Annuminas is quite lovely, but for a hobbit? Eh, yer can just imagine me saying something akin to: “Well, aye, it is nice and all, but it just isn’t the Shire”. This is the kind of screenshot I love to make. Find a creature roaming the game world, then try to create a fun, interesting or exciting scene on the go. With varying success. All those creatures move, more often than not at the wrong stage of an emote. I need to rotate the camera and try keep up with the critters as well, which is hard on its own when you’re furiously trying to snap a picture. The failures are many.

Still, I am pretty happy with this one, where I sneak up behind a shrew to mock it. It looks surprised. Then again, so was I when I saw the final screenshot. Another favourite type of screenshots is to do similar scenes, but at different times of day. Here are a few variations of greeting the sun, at sunrise and sunset respectively. Or at sunrise and moonlight, for that matter. I really like the yule festival in LOTRO, especially when it is on around yule (the Easter and summer encores are abominations, though, which should be banned and stopped and cast into the fiery pit from whence it came). A favourite quest is the keg run, where you pick up a keg, run about 30 meters (avoiding a guard) and deliver it for a handful of yule tokens. Cost-benefit-wise, this is as good as it comes.

Another reason why I liked this quest was the ridiculous size of the keg. Just seeing a hobbit running around with a massive keg was enough to brighten my day. Imagine my disappointment, though, when I logged into last yule fest and found that SSG had reduced the keg size to a pretty normal one. Bummer!

Honestly, the world graphics team at SSG seems to spend an awful lot of time changing things that no-one (read: me) really wants changed. So no more enormous kegs… but at least we have the memories. And the screenshot below. The screenshot is not so grand, but the end result really is. I am still amazed that it is possible to turn this… … into this. Read more about Syaven’s lovely work on a portrait of me here. Back when Mordor was released, there were lots of complaints about how hard it was to quest in the new area. The mobs hit hard, especially for players who hadn’t spent the last half year or so gearing up. Personally, I didn’t find it that hard, but wardens were always rather robust in solo questing anyway.

Still, it was rather nice to find a handful of quests where you could dress up as an orc and then run around with little danger of combat. However, I found that the orcs’ movements were rather odd, and not at all as frightening as you would expect from Sauron’s ex-servants. It looked more like they were engaged in their very own Saturday Night Orc performance.

So I did this…

More than a year later, twerking really hit the world news. I hope the DJ didn’t get the idea from here… Eh, with just about 190 video views, most likely not.

One Response to Pictures by an intrepid, nosy hobbit adventurer: Part 7 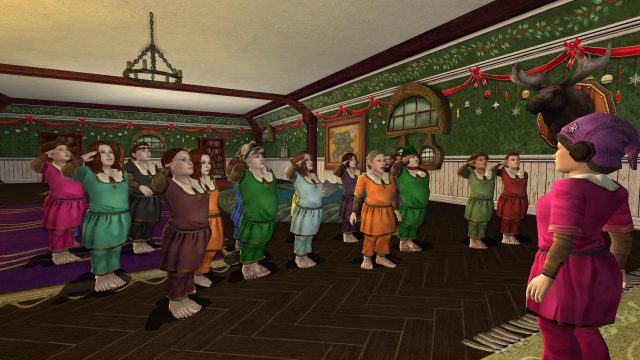