More fun, exciting and/or quirky-looking pictures by that hobbit adventurer! I’ll just give yer the images posted on my Twitter account the last week, for no reason other than that I like them images. Well, and that I can fix one or two errors/typos I can’t edit on Twitter. Additionally, I can let yer in on some of the references I use in my images or their captions.

If you like them images, here is Part 1, Part 2 , Part 3, Part 4 and Part 5 as well. And oh, click on the pictures for larger versions. Oh, and let me know if yer like them pictures in the comments below! Dwarves love me. At least until they check their larder for biscuits after my visit.

From the Mordor dwarven allegiance quests, I jumped at the opportunity to capture some dwarven praise. I wonder if dwarves really eat much in the way of biscuits, though. Them crumbs must be awful in those huge beards? In the hobbit art community, few paintings are as popular as the classic “Devouring biscuits at sunset”.

In Norway, one of the classic “kitch” painting motives is “moose at Sunset”. I figured I could do a riff on that, only with biscuits. Hobbits and their battle oliphaunts. Grey as a mouse, big as a house, six meals a day or they’ll fuss and grouse.

In the LOTRO store, you can purchase a “Makeshift Mumak” for yer garden. Unless yer me, then yer can just run over to Penny’s place and play with her oliphaunt instead of buying one yerself. The “grey as a mouse” line is from Sam Gamgee’s Oliphaunt poem. Silly king singling me out. So what if I ate a few more biscuits than the rest?

It is a gargantuan effort to eat enough biscuits on behalf of a kingdom, I tell yer. Strider was impressed… Minas Tirith as seen from above at sunrise. Grand views! No biscuits were harmed in the making of this picture…

One of the Mordor menfolk alliance quests leads you up on a ledge overlooking Minas Tirith. I usually prefer to have people/hobbits in my pictures (more often than not myself), but this one was such a grand view anyway.

For some strange reason, the image I posted on Twitter bugs out and does not display half the time. No matter, now yer can see it in all its glory right here! It is oreful being stuck up here..

Standing around on a piece of ore is dangerous at the best of times. If yer don’t fall down, yer can be sure some enterprising hobbit will come over and mine it, even though yer standing up there enjoying the views. I had to outrun a local miner for five minutes until I managed to take the screenshot. Perhaps that’s why I look so worried?

If nothing else, the screenshot led to a pretty decent thread of mining puns. Who needs a hammock when yer got an oliphaunt? So soft yer feel like yer floating. I bet yer a biscuit Sauron never figured on this fate.

One minute, yer were a powerful mean Dark Lord, poised to conquer the world as we know it. The next, yer statues are crumbling under the might of two hobbits and a dog. ‘s almost as yer have to feel for the guy. So would I, had I been stuck in the ice without biscuits for a thousand years…

Forochel has long been one of my favourite areas in LOTRO. It is a huge area, filled with wonderful icy vistas, northern lights in the night skies, and that fabulous fog bug. Also, it has the icy ship of King Arvedui, last king of Arthedain who fled north after the Witch-King invaded Fornost. His ship crashed into the ice in Forochel, and apparently his ghost has been there ever since. A thousand years is a long time to spend frozen and without biscuits… During the flood at the Ford of Bruinen, “some of the waves took the form of great white horses with shining” yellow riders.

When Glorfindel and Frodo were chased by the Ringwraiths towards Rivendell, Elrond and Gandalf stuck their thousands-year-old heads together and probably said something like: “Dude, let’s raise this huuuge flood at the Ford of Bruinen. Cool, dude. And, like add some white horse shapes to the water. That’d be irony, dude, white horses washing away them dark horses? Duude! You rock.” It’s a hard stare. Aunt Lucy taught me to use them when people have forgotten their manners. I’ll try it on that Witch King feller

One time I visited Carn Dum, I wanted a screenshot of myself standing on the Witch-King’s balcony. To get both myself and the towering castle in the picture, I had to angle the mouse upwards and zoom out a bit, and then yer couldn’t really see my face. So I did the new /stare emote, which makes you stick your head forward and gaze into the abyss or somet.

The “hard stare” line is of course a reference to the Paddington books and films. Not least the films, which are the most brilliantly entertaining movies around these days. 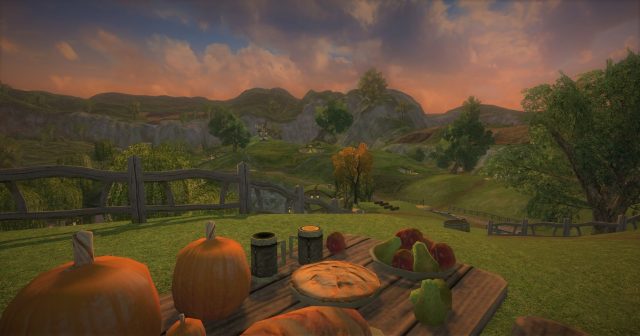 Rehearsal for The Brandy Badgers! New song notes are available in the usual place! The Badgers are currently secretly working on their spring project, so they are holed up in a different location than their...
View Calendar