Every time. Every dang time.

Weatherstock weekend is coming up, with 18 music bands battling it out over on the Landroval server Saturday July 22. Such a huge event can be somewhat unpredictable, with the possibility of delays, server wobbles and even crashes. The only thing you can be reasonably certain of is that the members in every single band performing will wear matching uniforms.

I suppose it is natural that it is so. LOTRO’s cosmetic system is one of its strengths, giving lots of options to create individual outfits for your character. Creating a uniform makes the band stand out from the crowd, keeps things tight-knit and helps build an identity for the players. Hence, LOTRO bands are likely to spend a fair bit of time agonizing over their costumes, before settling on the way they want to look. More often than not, the result is pretty much colourful and outrageous. You can see lots of examples of LOTRO band uniforms in this Weatherstock forum thread.

Personally, I prefer to play without a set band uniform. The hobbit music collective I run, The Brandy Badgers, rarely plays in similar outfits. We have a “badger” costume which we can use every time we want to pretend that we are musical badgers (they don’t really exist, you know). But for the most part, I prefer folks to show up in their everyday outfits. A rare sighting of Badgers in uniform. Or are they actually real?

People sometimes ask me why (hence, I suppose, this blog). There are many reasons. First of all, it is easier this way. No need to worry if someone forgot to bring their outfit or picked the wrong-coloured version of their tunic. Just come as you are. This matches also well with my roleplayer approach to the game. I mean, unless you play in a marching band or in KISS, chances are that you’d never show up in a set band uniform anyway.

Most importantly, though, band uniforms make me chuckle every time I see them

Why, you might ask? Ah, it is not to be mean, and I generally think it is grand that folks have a fun time in-game. However, I get these flashbacks to other types of bands whenever I see a set uniform. And this brings us over to Scandinavia.

In Norway and (in particular) Sweden, one of the more popular musical styles in rural areas is performed by Dansebands. This is very dance-friendly music (swing, waltzes, classic rock) performed by middle-to-late-aged lads who travel the land in tour buses, singing songs with good-natured, sappy lyrics of love, friendship and the good life in the countryside. As you might suspect, the hipper, urban-oriented part of the population is unlikely to touch a danseband with a 25-foot pole.

And this brings us over to uniforms. More often than not, the musicians in a danseband wear similar outfits. This has lead to some absolutely astonishing band pictures and album covers over the years, not least from the 70s. 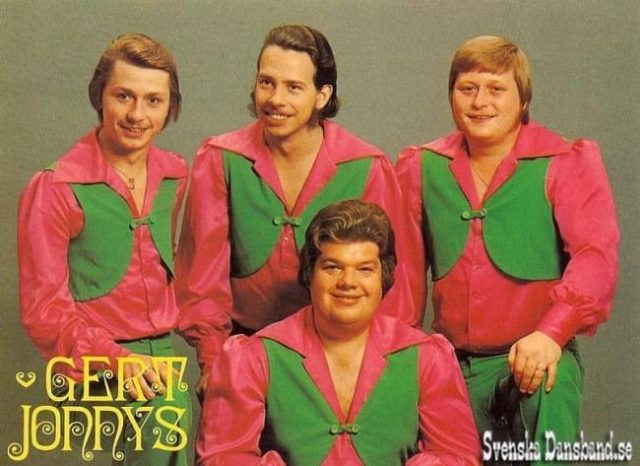 13 Responses to Why LOTRO music band uniforms make me chuckle