Music makes the people come together

Yule time is music time! Not least on Laurelin, where new bands pop up faster than yer can eat a biscuit. Last week saw two winter and yule themed concerts kick off the yule celebrations; one by one of the oldest bands around, another by a relatively new group of musicians. Here are a few pictures and impressions.

The Shades at Berghold, December 11th

The Shades is one of the powerhouses of the music scene on Laurelin. They have been around fer a long time, have a unique visual look and not least perform some truly grand music. All composed by themselves, with music and words written by Achazia, Abergar and Eovina.

This concert, titled “A winter night”, was held at the dwarven fortress of Berghold outside Thorin’s gate. Many people had taken the journey there, and the crowds filled the stairs of the old fortress, even triggering a rather rare instance of dynamic layers.

The concert itself? Quite magical. You can’t beat The Shades on style and coordination, the location was grand, and the overarching story gave provided a lovely frame for the different songs played.

Of course, us hobbits started dancing as soon as the first chord was struck… (not ter mention that we had already warmed up by playing and dancing around a campfire).

For more impressions from the night, see the official forum thread. 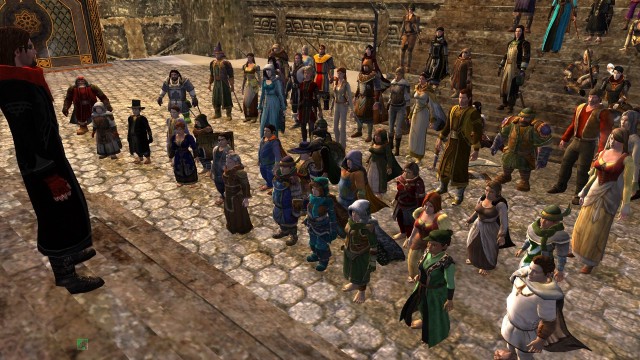 Hobbits line up at the front row, ready to dance!

A more intimate concert, although very lovely too, was the Hobbit Heart Yule concert in Twigwarren last night. Hobbit Heart is the band of Amorey and Peppy, playing together since last summer. Last night they were also accompanied by masters Trotgard and Simbo.

The band performed many yule songs on a stage in the garden of miss Amorey’s burrow. Songs included old favourites and new yule tunes, with original lyrics written to most songs. Obviously, many hobbits had come to listen in (after all, the promise of food and music is bound to rouse the locals). A few longshanks and one dwarf had also taken the journey to the Shire homesteads to enjoy the concert, and all seemed to enjoy hobbit music immensely

The show had the audience dancing from start to finish, and much cheer was given to the musicians afterwards. Once the concert was over, other musicians were invited to the stage to perform their own tunes. As the night set, the garden was still full of songs and happy laughter. Foreyule in the Shire is a grand time!

For more impressions from the concert, visit the official forum thread. 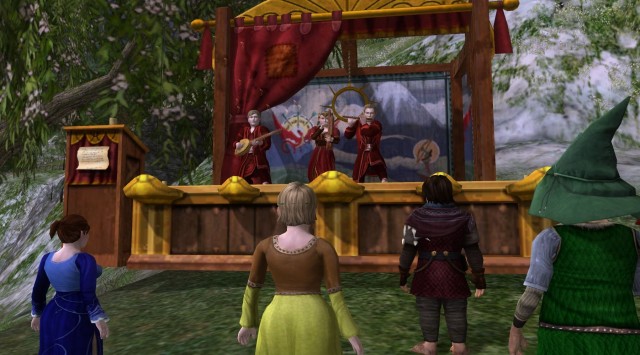